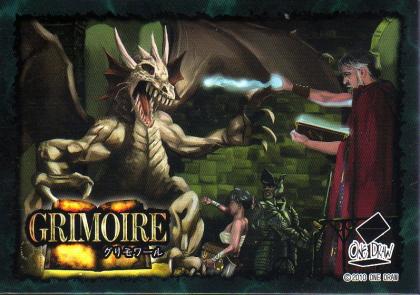 Grimoire is the French word for "spellbook", and smart use of your spellbook – more specifically, the spells within said book – will determine whether you succeed in this game.

Each turn in Grimoire starts by revealing several cards on the game board; each card has either a victory point (VP) value or is a character with a particular way to earn VPs at the end of the game. Once these cards are revealed, each player secretly chooses which spell to cast in his spellbook by placing a bookmark on the appropriate page. Everyone then reveals which spell they chose, with the spells going off in order from weakest (those with the lowest numbers) to strongest. Some weak spells nerf stronger ones, and the order in which players choose cards from the display can be flipped topsy-turvy depending on who plays which spells.

In the One Draw and Z-Man versions, the game ends as soon as one player has collected either ten character cards or ten treasure cards; in the Schmidt Spiele version, the game ends after a fixed number of rounds. All players then tally their points, and the player with the highest score wins.

Differences between the versions:

As noted above, the game ending conditions differ in the 2012 Schmidt Spiele version.
The Z-Man Games and Schmidt Spiele versions of Grimoire accommodate five players, while the original One Draw release allows only 2-4 players.
The Schmidt Spiele version contains four new character cards and two new treasure cards, includes hardcover books instead of softcover, changes two spells, and uses a more elaborate game board that depicts the spells and allows players to mark the spells chosen with small figures to track who has played what.