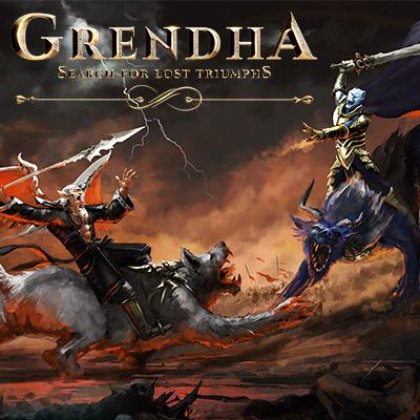 Summary:&#10;Grendha is an epic miniature game told through the thrilling story of a God gone mad and his two son&rsquo;s quest to restore order. To do so they need to collect all of the pages of the powerful book that once belonged to their father. However, they have different views on what to do with the book. Should they destroy it or should they use the power that its pages unlock?&#10;&#10;Players: 2-4 players, Competitive and co-op experience.&#10;Type: Exploration, Strategy, War, Area Control, Set Collection, Resource Management, Negotiating/Trade&#10;&#10;Game Play&#10;&#10;In Grendha you take on the helm of one of four powerful heroes.&#10;There is an ancient tome, and it is said that the hidden secrets of creation were locked inside its pages. There are also whispers that the same book turned a once benevolent god mad and caused him to turn on his own people. There is no way to know if the powerful tome can be wielded for good and restore order because the pages were torn from the binding and scattered through time and space. The book could not be destroyed, but it could be hidden. It is time for the book to be restored.&#10;&#10;The objective is to search the map, collect those pages, and reform the lost book Grendha. The game can be played in a purely competitive mode at two players, or a cooperative team play mode at four players.&#10;&#10;At all player counts, each player will choose a hero and take command of them and their armies. During the game, you will explore the mythical lands, command your warriors, collect items, discover clues, and gather resources. Your hero will need to slip through time, enter the celestial city, and discover the location of the lost pages. Quick! Your hero must restore the book before it is too late.&#10;&#10;