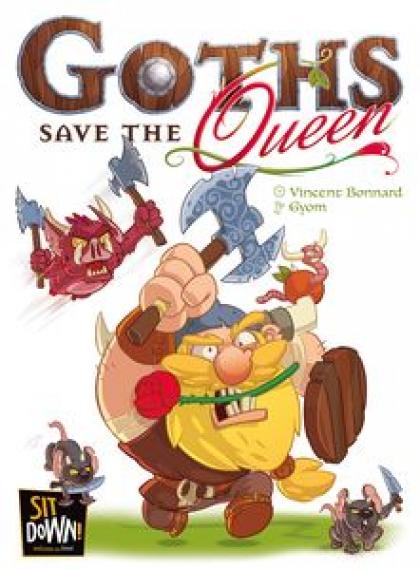 Goths Save The Queen

Descrizione tratta da Boardgamegeek:
In Goths Save The Queen, two two-player clans fight to save the Queen hidden in the middle of the table. Each clan is composed of one player giving orders (the King) and another one trying to understand which order has been given (the Warchief).

To give an order, the King chooses a card and flips it onto the table to reveal two orders on its back, with no clue as to which is the right one. The Warchief checks the battlefield, then tries to choose the right order with a card in hand. When both clans have chosen their cards, all of them are revealed, and if both cards match on a clan, then the order is carried out. Some examples of orders: loading the catapult, firing with the catapult, progressing toward the Queen, looking at hidden cards in the middle to find the Queen, and avoiding traps...

Of course, within a clan it is absolutely prohibited to make any sign or say anything to help the partner to guess which order is intended.

When playing 1-vs-1 or 1-vs-2, the game is a bit different: The single player team cannot play the same order twice, one turn after another.