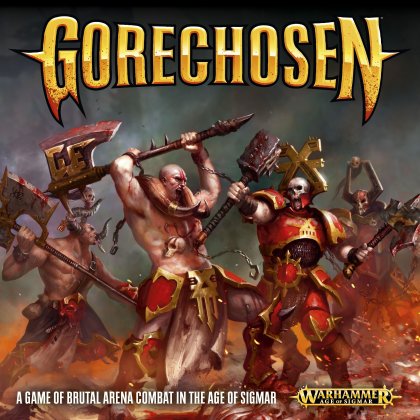 From the publisher:&#10;&#10;Are you ready to prove yourself Khorne&rsquo;s mightiest, most ruthless champion? Gorechosen gives you the chance! This brand-new boxed game from Games Workshop lets four players slug it out for brutal supremacy in brutal pit fights. The box includes four plastic multi-part Citadel miniatures: the Exalted Deathbringer of Khorne, the Skullgrinder, the Slaughterpriest and the Aspiring Deathbringer with Goreaxe and Skullhammer &ndash; four iconic champions of Khorne.&#10;&#10;The game itself is a simple, cunning and laugh-out-loud mix of subtle strategy and straightforward brutal combat, and four players can play through a game in about an hour. 24 action cards let your chosen fighter pick from a variety of painful attacks and gambits (our favourite being the humble Shove, should your victim happen to be standing next to one of the fire pits present on the game&rsquo;s board) while 16 injury cards present, in gruesome detail, the inevitable results of standing in a spiked pit with three other crazed madmen. And the fun doesn&rsquo;t stop with the feuding &ndash; players who have been knocked out can still influence the game thanks to special Fate of the Slain rules. Full rules for these fighters are presented on four fighter sheets, and rules for four more (with miniatures available separately from Games Workshop) are included inside the game&rsquo;s rulebook.&#10;&#10;Each fighter has a unique Kill Zone which dictates what they can hit, and how powerfully. The Slaughterpriest in the box, for example, has enormous reach forwards with his axe (because it&rsquo;s flipping massive) but is weaker when to the sides. (You can imagine an overhead chop, rather than a sweep around him.) Each fighter also keeps track of his wrath using the Wrath Track. Wrath can be spent to make actions, and is usually accrued when fighters are wounded &ndash; injury cards, which are received when combatants are damaged, affect wrath in this way.&#10;&#10;Wrath also has an effect on who goes first, because the angrier fighters are, the more chance there is they will act first! Each turn, fighters put in a number of initiative cards equal to their wrath (each player has a unique design of initiative card), then the top initiative card is turned over, dictating who will act. After that player has made an action, the next initiative card is turned over, and so on and so forth.&#10;&#10;