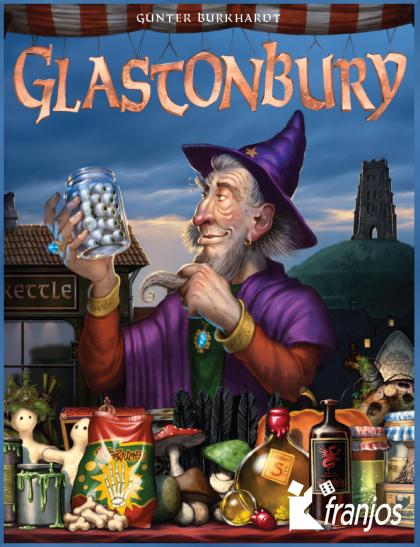 In Glastonbury, the players are witches and wizards who shop for ingredients for their magic potions. Your token moves around the perimeter of an array of ingredient cards, and you pick one from the row or column where you stop. The number on the card you pick dictates how many spaces you move on your next turn.

To score points, you need to collect sets of four matching ingredients; if you have only one of a particular ingredient, you'll score penalty points instead. The scoring rules can be made more complicated if the players desire, but for most the basic rules are satisfying. A touch of memory is involved since you can see only the most recently chosen ingredient on your stack of cards.

Glastonbury is a new edition of the 2001 release Kupferkessel Co. with slight changes to the game. Now the game can be played by up to four players instead of being strictly a two-player game. The game includes additional ingredient cards and new spell cards that allow special actions.