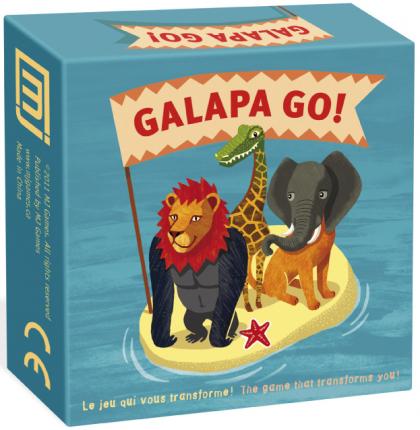 In Galapa Go! (aka Kroko Togo), players have come across a newly discovered island teeming with animals both normal and not-so-normal. To be honest, they're mutants - animals with a giraffe body and alligator head. That kind of thing. Hunters are preparing to descend on the island to take home a few trophy animals, so it's up to you to save as many animals as you can. Save more than anyone else, and you win the game.

The game includes a deck of 30 animal cards – each showing one or two animals of the normal or mutant variety – along with 48 criteria cards and 18 special cards. Fifteen animals are laid out face-up on the table, then a player turns over a criteria card that shows animal-claiming restrictions (e.g., you cannot claim an animal card showing any part of a lion) or requirements (e.g. you can claim only those animal cards showing a blue starfish and a giraffe).

Each player has a color-coded island card, and once the criteria card is revealed, everyone races to slam their island card on an appropriate animal. Once everyone has done so or passed, they claim the card if it meets the criteria or lose a previously-claimed card if it doesn't.

Once most of the animals have been claimed, the second set of 15 animal cards is added to the table. Once at most one animal card is on the table, the game ends.

Galapa Go! contains two variants, one in which two criteria cards are revealed each round with animals being claimable only if they match both criteria cards, and a second in which the special criteria cards are shuffled into the deck at the start of play. These cards include conditions like claiming a non-mutant animal or claiming the animal that appears most or least frequently in play.