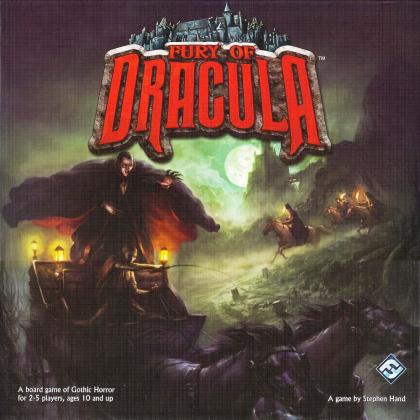 In Fury of Dracula, a game of Gothic adventure, one player takes the role of Dracula while up to four others attempt to stop him by controlling Vampire hunters from the famous Bram Stoker novel.

Dracula has returned, and is determined to control all of Europe by creating an undead empire of Vampires. Dracula uses a deck of location cards to secretly travel through Europe, leaving a trail of encounters and events for the hunters that chase him.

Meanwhile, the hunters attempt to track and destroy Dracula using the limited information available to them - a task easier said than done when their prey has the power to change forms into a wolf or bat, and can even melt away into the mist when confronted.

To save Europe and rid the world of Dracula's foul plague, the hunters must destroy Dracula before he earns enough victory points to win the game... will they have enough wit and bravery to defeat the dark count?