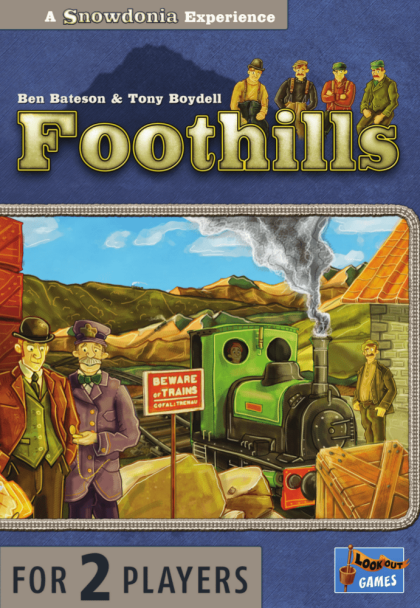 The men who built the railways arrived with sound boots and got their shovels on credit; they were issued tickets, in payment for their work, which could be spent at the Tommy Shop or (more likely) on beer! As a ganger, or foreman, you are responsible for your own team of navvies as they travel through Mid and North Wales: digging the track beds, laying the rails, and occasionally helping a passenger or two along their way. Foothills lets you participate in grand-scale railway construction while paying attention to the small details; manage your navvies' work carefully, and you should be able to let them go to the pub at the end of the day.&#10;&#10;Foothills is a tactical and intriguing two-player card game from new designer Ben Bateson and the designer of Snowdonia, Tony Boydell. Using your five action cards cleverly, collect resources, remove rubble, build track and stations, and use the action spaces you unlock, all the while collecting more victory points than your opponent. In the end, the player with the most victory points wins!&#10;&#10;&mdash;description from the designer&#10;&#10;