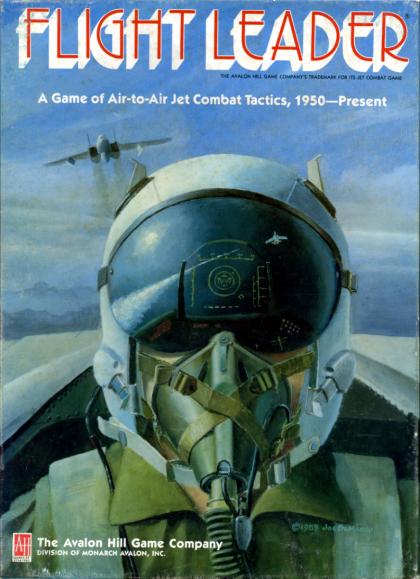 (from the back of the box:)

FLIGHT LEADER puts YOU in the cockpit or a high-performance jet fighter, commanding two to eight high performance aircraft, YOUR mission is to establish "air superiority" by clearing the enemy from the skies. FLIGHT LEADER was designed by fighter pilot Captain Gary C. Morgan for U.S.A.F. training and is a highly realistic, yet easy and fun-to-play game which depicts modern aerial combat. You can refight any air battles from the subsonic gunnery duels of the Korean War to the deadly technology of the supersonic missile engagements of the present day. As a fighter flight leader, YOU will face the same considerations and make the same decisions as your real world counterparts: energy management. fuel awareness, terrain, environment, altitude and formation, radar lockons and visual sightings. pilot quality and weapons systems. Four MiGs have Just "bounced" YOUR two Phantoms-what do YOU do now?

•Endless Scenario Variations: Use any of the over two dozen scenarios covering the Korean. Middle East, India-Pakistan, Vietnam. and Falklands Wars or devise your own scenarios.

•Over 200 Different Jet Fighter Aircraft Types: We're not claiming that ALL types are represented, but if an aircraft IS classed as a fighter or fighter-bomber, the odds are that it's here and YOU can fly it.

•World Air Order of Battle: 100 nations that operate jet fighters plus the aircraft they use and the quality of their pilots.

•Basic, Advanced and Optional Rules: Rules with "layered complexity" to help in learning the game. Choose the levels of complexity and detail that YOU enjoy.

Flight Leader is a turn based, hex and counter tactical game of "modern" air combat (Korean War to 1986). Each turn is 30 seconds, each hex is 1 km, and each counter is a single aircraft. It was known as Check Six when first used by the Military for training pilots as part of Project "WARRIOR"