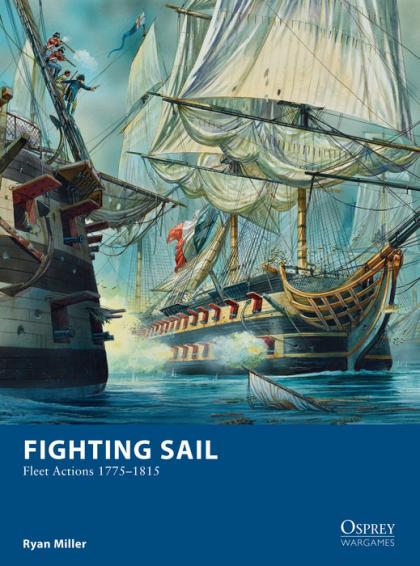 Fighting Sail: Fleet Actions 1775–1815 is a tabletop miniatures wargame of fleet battles in the age of canvas, cannon, and timbers. Players take on the roles of fleet admirals in battles ranging from the American War of Independence to the Napoleonic Wars and the War of 1812. Each fleet has access to different ships, tactics, and command personalities - each with its own strengths and weaknesses. Offering a unique blend of detail and simplicity, the scenarios included enable the recreation of historic actions or 'what-if' scenarios.

The rules are designed for 1/1200 scale ship miniatures, although they can be easily adjusted for smaller scales. Game focus is on ships of 6th Rate or above. The game is hex-less, so uses movement and turning templates along with a tape measure or ruler. Combat and other tests utilize a pool of six-sided dice.

Fighting Sail was designed with a crew-centric approach and has a goal of immersion over simulation. To perform actions players roll a number of dice based on crew and ship capability to test against a target number. More successes return a better result (more movement, more hits in combat, more damage saves, etc.). The goal of the game is to break the enemy fleet by reducing their morale to zero. Morale can be lost by taking damage, suffering a collision, or when a ship is taken out of action (by striking, being sunk, or captured in a boarding action).

The Fighting Sail rules include a points-based system for building fleets and balancing scenarios. The ship/crew capabilities and special rules for eight fleets are detailed in the book (including privateers and pirates). Six general engagement scenarios are described to get prospective admirals started on their journey into the adventurous age of fighting sail.