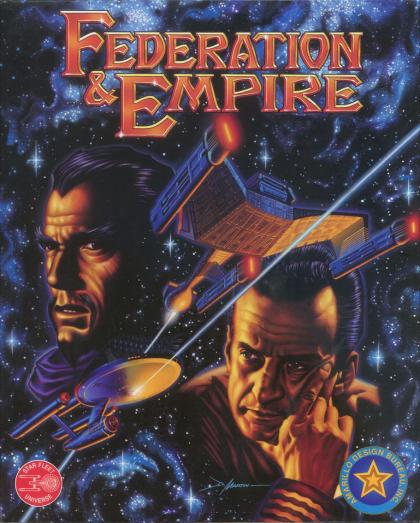 This sprawling empire game is set in the Star Fleet Universe. Players command one or more races in a variety of scenarios as they replay the "historical" situations in the galactic politics of the future.

It is the base set for the Federation and Empire series of products.

The original version came out in 1986, and was published by Task Force Games. This was followed in 1990 with the "Deluxe" version, which replaced the original release. "Deluxe" was indicated on the front of the box to indicate it was the new version. The Deluxe version included a revised rule book, more counter sheets, and other player aids such as the battle board and player folio.

The "Deluxe" version had three expansions:

In 2000, another revision of the rules was completed, and the F&E 2K (as it is called) version stood for a decade.

In 2010 the countersheets were entirely redone (with a larger number of counters per sheet) and the rulebook was once again revised to incorporate the last 10 years of errata and rulings, allowing a better integration with the expansions that were released during this period.

Since 2010 ADB has created, in both print and pdf form, Compendium I, II and II. The first two covered the F&E sections in Captains Log’s 21-40. All material for the base game from these is in the 2010 rule book however material for the expansions Advanced, Combined, Planetary and Strategic Operations are in the first two Compendiums’. Compendium III has Captains Log’s 41-50 which were all printed post 2010 rules.

Fighter Operations is now updated to the 2010 standard. All relevant items from the first two Compendiums' is included.