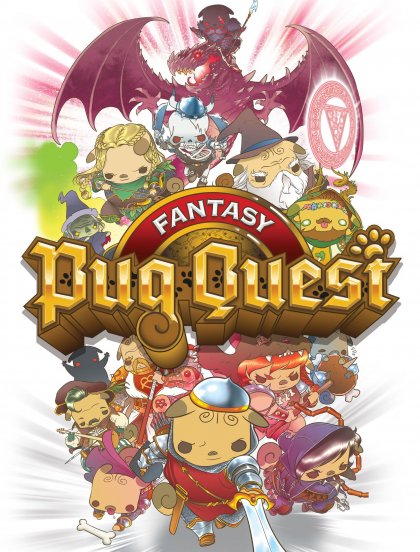 Fantasy Pug Quest is a non-collectible card game for 1-5 players which lasts about 30-45 minutes for Heroes of age 10+ which will have to cooperate in order to defend their worlds from the conquest of the evil forces menacing them.&#10;&#10;Fantasy Pug Quest is inspired by the heroic atmospheres belonging to the first Dungeon &amp; Dragons edition and on tactical combats from JRPG like the very first episodes of Final Fantasy: the will to cooperate and the fraternity spirit which usually bonds adventurers are the main basis of our project!&#10;&#10;The players, the brave good-doers pugs struggling to bring peace among the animal races, will have to fight Monster and their Bosses in order to free the Worlds they live in, adapt to their rules, gather Energy to perform incredible Combos, pick up Treasures and share with their party in order to maximize their power and finally save the day!&#10;&#10;HOW THE GAME WORKS:&#10;A game of Fantasy Pug Quest is fast and easy!&#10;Starting from the youngest player and continuing clockwise, every player chooses an Hero Ability Card and the corresponding Hero Character Cards are placed on the Gaming Area starting from the Hero with the lowest Initiative value.&#10;&#10;Then every player draws as many Energy Cards as shown by the table and a World Card is revealed in order to know which special rules will apply to this game: the World Card also determines where the Monsters will spawn on the Gaming Area.&#10;&#10;Everything is ready for the fight and the creature with the highest Initiative value starts the first Turn of the first Round of combat. &#226;&#128;&#168;Heroes use their Energy Cards to perform as many Combos as they want during their Turns (chosen from those available from their Hero Ability Card); moreover they can perform up to 2 Actions chosen among: Move, Attack, Draw, Discard. The same Action can be performed more than once.&#10;&#10;Monsters follow the rules written on their own Cards: one random player will move them and make them perform their attacks during their Turns by simply following such rules.&#10;&#10;Are you afraid it is too hard for your small fluffy pug to fight all such scary Monsters? No panic! Your faithful doggo will find precious Treasures on its path and increase its Level in order to unlock new Combos, power up its attacks, cure its wounds and that will definitely help him/her save the day!&#226;&#128;&#168;&#10;&#10;The fight goes on until the Heroes are defeated or the Monsters are; first scenario: the game ends.&#10;&#10;At the end of each scenario the brave pugs will meet a Pug Merchant so they can buy Treasures or trade their own Energy Cards or loot: collaboration is the key to survive!&#10;&#10;Second scenario: the players may go on to the second World and eventually to the third one, the Boss lair.&#10;&#10;Bosses have their own special abilities and will represent the hardest enemies for you proud doggos to defeat!&#10;&#10;Godspeed you, brave pugs! May the cards be ever in your favor!&#10;&#10;&mdash;description from the publisher&#10;&#10;