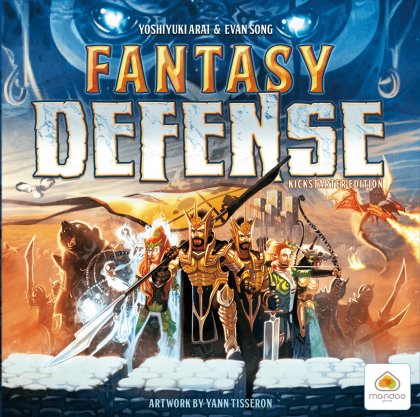 Fantasy Defense is a challenging card game that can be played either solo or cooperatively. Manage your limited units to defeat the orcs besieging the seven gates of your city. Each attack you fail to repulse decreases your kingdom's morale, drawing oblivion a step closer.&#10;&#10;Secure victory by slaying the invaders before it's too late &mdash; but don't breathe too easily! With each milestone reached, you unlock hidden game features: powerful units join your cause, devastating foes appear, and special rules twist the challenge in new directions.&#10;&#10;The objective of the game is to defeat the invading orcs by discarding their entire deck before your kingdom's power is reduced to zero. By playing your cards on the city gates, you can defend against the invading orcs, but with every fight there will be casualties on your side. Play your cards wisely to achieve victory. If you win, you will be able to unlock new terrifying foes entering the battle.&#10;&#10;