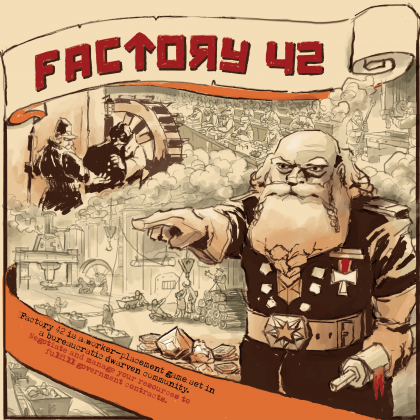 Factory 42 is a Euro-style board game for 2-5 players. The game tells the story of the workweek of Marxistic dwarves in a steampunk industrial setting, placing the player in the role of factory Overseers. It combines worker placement and a cube tower to create a resource management puzzle. Factory 42 is a cutthroat competitive game with elements of co-operation and deals involving Economics, Fantasy, Industry and Negotiation with a pinch of satire, but not too much to make it a Humor game. It satisfyingly blends two-fold tensions: camaraderie forged in shared goals, and the opportunistic trampling of temporary competition. A tight game of glancing blows and communal glory creating a wicked blend of sharp elbows and shared ambition. Visually, Factory 42 takes its influence from 1920&rsquo;s Soviet Union propaganda, fantasy literature and elements of pre-WWI Prussian decor.&#10;&#10;The general process control at Factory 42 is as follows: &#10;&#10; Receive work orders/requisitions from the government&#10; Receive some of the requisitioned resources (as determined by the cube tower)&#10; Load resources (and spike additional resources) onto railcars&#10; Transfer the railcars to docks at individual manufacturing facilities&#10; Burn leftover resources to generate steam&#10; Trade resources on the open market&#10; Use steam and resources to manufacture requested items.&#10; &#10;&#10;&#10;&#10; Capricious Bureaucracy:* Resources made available to all players, making up a common pool, are delivered via the Bureaucracy Tower; a mechanic that can deliver or withhold resources in a random manner. This replicates the notion that &ldquo;the powers that be&rdquo; redirect funds/resources by tying them up in red tape, trapping resources that would otherwise normally be available for the general populace. What goes into the tower does not always come out, or may have been held up during some unknown bureaucratic process, to later materialize when least expected&#10;&#10;&#10;&#10; Requisition:* Tactical decisions start with the acquisition of resources vital to the production process. The order of worker meeples on the requisition line dictates the volume of resources acquired for the common pool (available to all) and the number that can be obtained and stored in a player&rsquo;s personal warehouse. Choices made here can benefit a player&rsquo;s future actions but may also unwittingly aid a rival, making each choice so very important.&#10;&#10;&#10;&#10; Loading:* Players can tactically direct their workers to the loading bays where resources are loaded onto lines of rail transport. Order here can be extremely vital to one&rsquo;s success. Misjudging the order (or cunningly foreseeing the future) may lead a player to have to load a cart for a rival rather than for one&rsquo;s self. Alliances may be made during this process, just as enemies can be made of rivals, depending on choices made when loading&#10;&#10;&#10;&#10; Shipping and Storage:* Once loaded, each rail cart proceeds to the shipping location awaiting direction. Workers have the option of forwarding on the loaded carts to player&rsquo;s docks. Once more order of placement is paramount as carts are only shipped in order. A cart may not contain useful resources and so could be sent to a rival, taking up valuable storage space, or maybe it will benefit a rival in an attempt to build a verbally agreed alliance. Often a cart has been loaded with a wide variety of resources and only part of this precious load is of use. Limited storage space in player&rsquo;s personal docks and warehouses dictates the shipping decision-making process as much as a rival&rsquo;s needs&#10;&#10;&#10;&#10; Trade and Research:* Commodities may be traded on an ever changing market, often enabling an unnecessary resource to be exchanged at a price, for something of more use. Research is equally important, allowing players to expand storage facilities, improve material handling in the manufacturing process or even learn how to use Invention cards to add special actions/abilities during play&#10;&#10;&#10;&#10; Manufacture and Accounting:* The government dictate what should...no, what must be manufactured during a game round. The government orders must be completed or many, sometimes all players suffer sanctions. A degree of cooperation is needed here for the greater good of Dwarven society, but on an individual level, completion of a government order leads to reward and ultimately progression on the path to victory&#10;&#10;&#10;