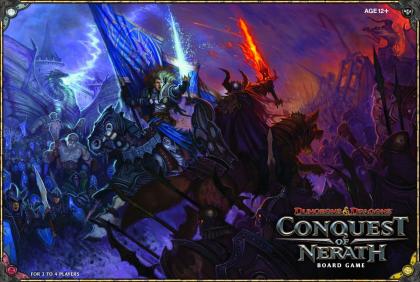 "War has come to the Dungeons & Dragons world! In the north, the undead legions of the Dark Empire of Karkoth march against the fragile League of Nerath, determined to sweep away the human kingdoms forever. To the south, the infernal Iron Circle launches its own goblin hordes in a campaign of conquest against the elves and corsairs of Vailin. From the snowy expanse of the Winterbole Forest to the sun-warmed coasts of ancient Vailin, four great powers struggle for survival."

Conquest of Nerath is a fantasy conquest game. 2-4 players muster armies of foot soldiers, siege engines, monsters, warships, elementals, and dragons to attack their opponents. Players employ heroes such as knights and wizards to lead their troops and explore dungeons in the search of magical artifacts and treasures to increase their power in combat.