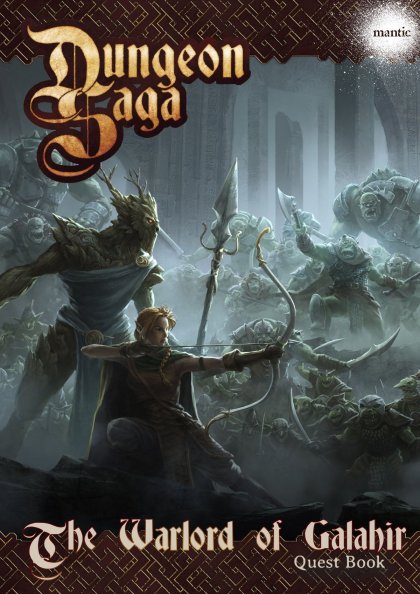 Dungeon Saga: The Warlord of Galahir

This quest pack introduces an all-new storyline, challenging adventures and exciting new components to add to your Dungeon Saga collection.&#10;&#10;In The Warlord of Galahir, join the battle to free the imprisoned merchant Pietor Grube from the clutches of foul Orcs, recover the treasures of Sarennia and destroy the tyrannical warlord despoiling the once idyllic forests of Galahir. Do you have what it takes to restore peace and civility to the good people of Penn-Scarr?&#10;&#10;Lead Four New Heroes! Kapoka the Gladewalker Druid and the Salamander named Hrrath enter the fray, along with Thesilar the ranger and fighter Guraf&#10;&#10;Invade the Orc Lair! Journey through the dank, subterranean habitat of the green-skins as you hunt down the menace bringing terror to the land&#10;&#10;Vanquish the Horde! Wade through legions of Orcs, Goblins, Mawbeasts and other beings of brutal ferocity in a visceral fight for survival&#10;&#10;Confront Thrundak Skullsplitter! Renowned even among his own kin for his extreme cruelty, this furiously violent Orc leaves nothing but rivers of blood in his wake.&#10;&#10;Show the savages no mercy.&#10;&#10;In the base Dungeon Saga one player takes the part of the evil dungeon overlord with the forces of evil at his command, and the others divide the mighty heroes between them. Each hero has strengths and weaknesses and teamwork is the key: The mighty barbarian can slaughter many foes at a time, yet he is lightly armoured and vulnerable to strong enemies. The Dwarf, on the other hand, is steadier as his thick armour can resist most attacks. The Elf is not as skilled a fighter as either of these, instead preferring to stay at a distance where her finely-honed archery skills can best be used. Finally, there is the wizard -the others may laugh at his lack of fighting skill, yet it is often his magic that carries the day. If the others can keep him alive, that is.&#10;&#10;

Voti e commenti per Dungeon Saga: The Warlord of Galahir