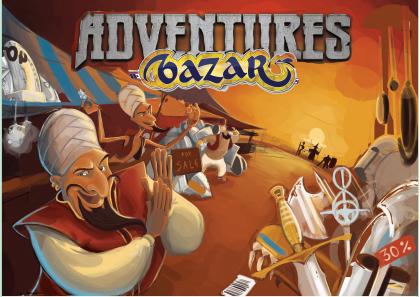 In Dungeon Bazar, the player merchants try to earn money by selling equipment — weapons, armor and tools — to heroes who wish to fight against an old dragon in a nearby cave. What the heroes don't know, though, is that the merchants have an agreement with the dragon as naturally they're interested in keeping their source of gold, the great lizard, alive.

Each player has a personal game board, and each turn they play, then reveal a number of equipment cards. Each hero card displays that hero's desired equipment and priorities. Once the cards are revealed, the heroes buy from the cheapest stand according to their priorities as long as they have money.