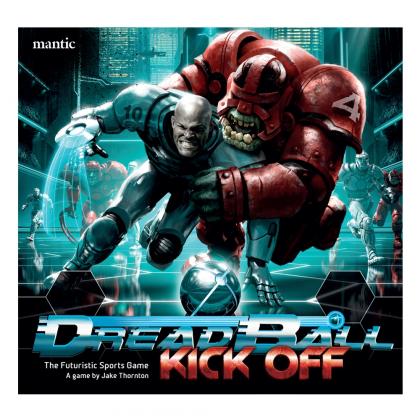 Dreadball: KickOff packs all the hyper-kinetic sci-fi sports game speed and ferocity of its parent game Dreadball: the Futuristic Sports Game into an introductory version.

The game lasts 14 turns, with each player getting seven turns. Each turn you have five actions to distribute between your on-field figures. The game takes place on field overlaid with a hex grid. The aim is to throw the ball for a score into one of three score zones in your opponent's half. After scoring, your turn ends and the ball is launched back onto the field. At the core of the game are the actions. Each of your figures can have up to two of your five allowance spent on him. Players need to plan ahead, especially if they score, since the board does not reset afterwards. Available actions include move, slam (tackle), steal the ball, throw the ball, pick up the ball, and stand up. The actions all have the same basic mechanisms, so learning and remembering them is easy. Seven points or more, or, failing that, the highest score at the end of the game wins.

KickOff is a simple new format that features a pocket-sized rulebook, game board, 2 basic starter teams and all the counters and dice needed to play. It simplifies Dreadball by removing most valuable players, RefBot, fouls and league play. In the box you will find no cards, ref, roster pad or hex bases. There are also two fewer models per team.