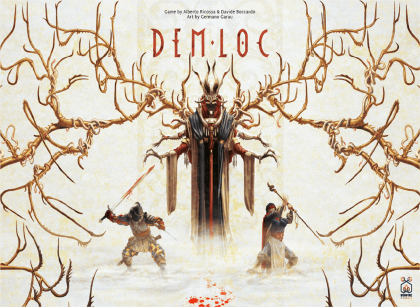 DemLoc is a competitive skirmish game played by 2 to 4 players set in the imaginary city of D&auml;monenloch. &#10;In DemLoc, players are the Guild Masters (sinister and powerful masters of the Guilds of the city) who have to fight against each other to increase their Guild fame and richness.&#10;Each game will influence the history of each guild and the progression will be on the guild itself and not on each character. &#10;The game develops in different missions where the players will use their characters trying to reach their objective and, thus, winning the game. The duration of each game session will be based on the number of missions played.&#10;The main characteristic of DemLoc is to switch between skirmish game sessions against other players and individual game sessions planning and improving a player own Guild. &#10;The namesake app makes the game more dynamic and lets the players keep track of their progresses, helping them during missions in the damned city of DemLoc. &#10;DemLoc is a board game strictly integrated with its relevant app; for this reason there are two different game modes:&#10;Individual game: exclusively on the app, which allows the players to manage their cards and their Guild acquiring buildings and improving those already acquired (e.g. enlarging the space of the Dormitory to enlist more mercenaries). In addition, the players could explore the city of DemLoc and could access to exclusive functions improving their knowledge of the world of DemLoc and making their Guild more powerful;&#10;Group game: using the material at their disposal, the players could fight in different missions to gain the control over relevant spots in different areas of the city of DemLoc, increasing their fame and gaining gold (feods). &#10;The app shows the players the objective of the mission (taken from a database; it could range from killing opponent characters to collecting objects on the map) and the map (taken from a database). Using the modular map, the players design the setting.&#10;Using the app, the players choose the mercenaries in the Guild who will join the mission. The game can start once the players have picked their cards and have placed the miniatures on the map.&#10;The game lasts from 5 to 10 turns (based on the objective and on the number of players). On each turn, the players could move their miniatures on the map using the square grid. Characters could shoot, cast spells, conjure daemons, and take part into hand-to-hand fights.&#10;The app is used to apply hits and status to the characters. At the end of the mission, the winner receives Fame points and gold (feods). The Guild uses the Fame to level up (thus being able to enlist more or stronger people). Gold is used to buy new weapons and Arcane Code for the mercenaries.&#10;In each game, the winner could conquer part of the city. His conquest will be shown on the map in the app.&#10;&#10;&mdash;description from publisher&#10;&#10;