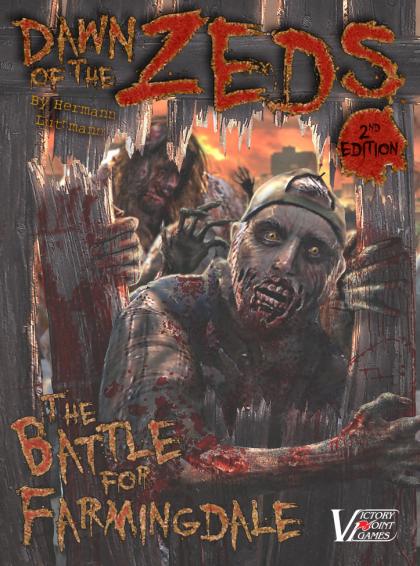 Dawn of the Zeds (Second edition)

THE BATTLE FOR FARMINGDALE

Arising once again from the grave, from designer Hermann Luttmann and lavishly illustrated by Vinh Ha, arises Dawn of the Zeds Second Edition as you've never seen it before. In this States of Siege™ solitaire game of horror and survival, your strategies will be put to the test. The world has gone crazy – a deadly virus has turned ordinary people into vicious, zombie-like killers. The undead, nicknamed "Zeds," are now converging on your corner of the world. You have been left to your own devices to stop them while the National Guard organizes a relief column and fights its way to you – but that could take days, or even weeks, before they arrive.

At the town of Farmingdale and its surrounding villages, you must coordinate its defenses. Regular citizens may emerge as heroes as you work to halt the Zeds' advances by (re)killing them, discovering and implementing a cure to this vile scourge, and preserving the area and its inhabitants as much as possible. In addition to this madness, the crazy Doctor Marteuse has been working in the underground tunnels and unleashing his uber-deadly Super Zeds, a nasty bunch of beasts that give havoc a whole new name. Bring him to justice, destroy the infectious Zeds, and save your city from peril!

In a game that requires the utmost test of skill and nerve, will you survive long enough? Will you be able to fight hordes of Zeds while protecting the townspeople? Test your heroics and unearth Dawn of the Zeds, a game that will keep you on your toes!

Number of Players: 1 brave soul (with cooperative multi-player play included)
Ages: 13 and up
Playing Time: Approximately 45-90 minutes
Complexity: 4 on a 9 scale (Intro), 6 on a 9 scale (Advanced)
Solitaire Suitability: 9 on a 9 scale
Scale: Each unit represents a single Hero plus their entourage, dozens of citizens, and hundreds of Zeds.

Polybag version has the paper board, not the mounted board.

Voti e commenti per Dawn of the Zeds (Second edition)