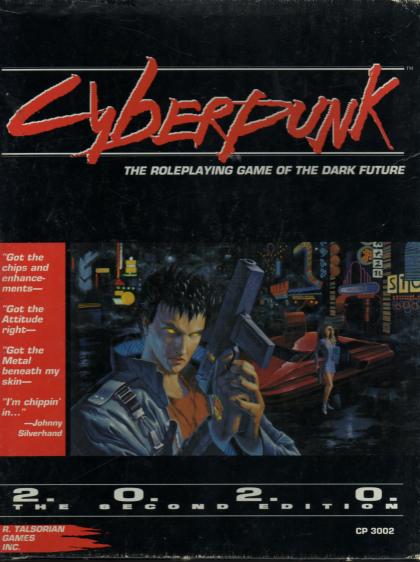 From the back of the book...

The Roleplaying Game of the Dark Future

The Corporations control the world from their skyscraper fortresses, enforcing their rule with armies of cyborg assas¬sins. On the Street, Boostergangs roam a shattered urban wilderness, killing and looting. The rest of the world is a perpetual party, as fashion-model beautiful techies rub biosculpt jobs with battle armored roadwarriors in the hottest clubs, sleaziest bars and meanest streets this side of the Postholocaust. The Future never looked so bad.

But you can change it. You've got interface plugs in your wrists, weapons in your arms, lasers in your eyes, bio-chip programs screaming in your brain. You're wired in, cyberenhanced and solid state as you take it to the fatal Edge where only the toughest and the coolest can go. Because you're CYBERPUNK.

CYBERPUNK: the original roleplaying game of the dark future; a world of corporate assasins, heavy-metal heroes and brain burning cyberhackers, packed with cutting edge technology and intense urban action. Within this box, you'll find everything you need to tackle the mean streets of the 2OOO's— in a game system that combines the best in realistic action aid play ability.
FEATURING:
Rockerboys: Hard-rock heroes fighting for change with music & revolution!
Solos: Corporate cybersoldiers— more machines than men!
Netrunners: Superhot hackers who can crack any Data Fortress!
Medias: Hightech reporters going to the wall to get the truth!
Nomads: Cyberbiking renegades cruisin' the lethal hghways of the
Postholocaust!
Corporates: Slick business raiders playing the deadly corporate power game!
Techies: Masters of cybernetics in the heavy-metal age!
Fixers: Streetsmart middlemen who know all the angles!
Cops: Maximum lawmen in the big-city jungle!