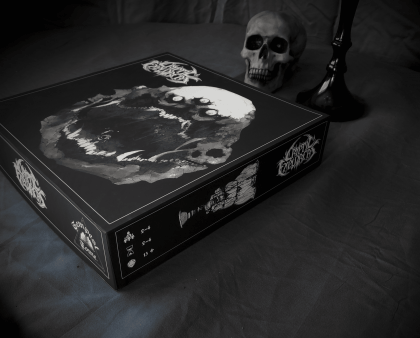 From the publisher:&#10;&#10;Past the stars and material plane are the Realms of Death...&#10;&#10;... a shifting multiverse of cessation and mystery. Mortals are strictly forbidden here, and no living creatures have ever gained access to this unholy domain &ndash; until now. On Earth a strange organization known only as &ldquo;Nauticus&rdquo; has discovered a gateway into Death itself. Known as the Maw of Thanatos, this gateway is capable of transporting living beings from Earth into the Realms of Death.&#10;&#10;Nauticus now prepares teams of human explorers, dubbed the Cryptonauts, to traverse the vast blackness of the cosmos and enter the Realms of Death, seeking the forbidden knowledge of mortality itself.&#10;&#10;CRYPTIC EXPLORERS is an asymmetrical tactics and survival horror board game for 2 to 4 players set in a unique sci-fi horror universe.&#10;&#10;1 to 3 players form squads of Cryptonauts to traverse the Realms of Death, gather Souls to unlock new abilities, battle monsters, survive the hazards of the Realms, steal powerful artifacts, and finally gather enough Knowledge of Death to escape back to Earth - or die trying.&#10;&#10;Opposing the Cryptonauts, a single player assumes the role of a Goddess of Death and summons monsters, casts Goddess cards, and uses abilities to isolate, cripple, and eventually kill the Cryptonauts invading Her domain - or fail to do so, and watch them escape with Her dark secrets.&#10;&#10;