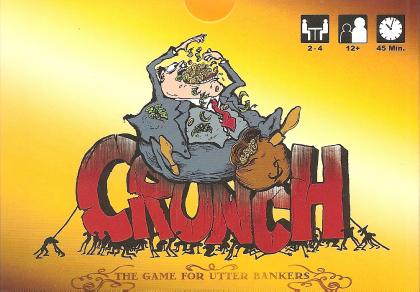 Crunch: The Game for Utter Bankers

The Crunch is here! Financial foundations are crumbling, while our nation's cherished traditions of greed, profit and exploitation are threatened.

As the CEO of a global bank, it's your personal responsibility to do whatever it takes to ensure a comfortable retirement. Call in government bailouts, award yourself bonuses and - when no one's looking - embezzle as much as you can, before it all comes crashing down around you.

Crunch is a card game for 2 to 4 players that allows you to experience the upside of down. Placed in the role of a global banking CEO, you have to juggle the conflicting demands of your ailing bank and your flourishing bank account.

Along the way, the game also replicates our modern banking system and foreshadows the inevitable collapse of capitalism, but that's just a bonus.

It's a Trust Thing
Each player starts the game with a number of Assets in their bank, a small workforce and a few Trust cards. Trust is essential to your bank's survival. Not only will capitalism falter without it, but each Trust card hides on the reverse a potential Government Bailout.

Government Bailouts can be called in at any time you're feeling the pinch (that's at any time) in return for a variable cash injection. Occasionally though you get nothing, so spend them wisely.

Debt Makes the World Go Round
Using your workforce, you lend out your bank's Assets as debt. You can dabble in high risk debt for potentially big rewards (and big losses) or stick to the safer (but less profitable) low risk debt. Either way, clever playing of the markets will bring in big returns.

Bonuses and Embezzling
But then that's all immaterial because what's really important is how much money you can secure for your own personal fortune. You do this by awarding yourself bonuses at regular intervals and by brazenly embezzling your own bank's Assets and hiding them when no one else is looking. If you get caught embezzling, you lose a Trust card and you remember how important Trust is, right?

Surviving the Crunch
Occasionally, the Crunch will hit and all CEOs have to make sure they can cover all the money they've lent out with the total value of Assets in their banks. If they can't, it's government bailout time or bust. But don't worry too much if that happens because if you've managed to bonus and embezzle enough, you can still win the game, even if you go bankrupt first.

Remember, you could run a model bank for the entire duration of the game, but if you fail to look after number one, you risk ending up yachtless.

Voti e commenti per Crunch: The Game for Utter Bankers