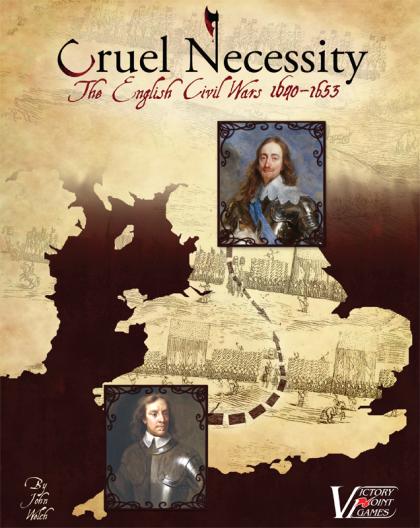 A States of Siege (TM) game.

This solitaire game, suitable for group and classroom cooperative game play, tells the story of the English Civil Wars (1640-53) through its key events and decision points. You attempt to stop the advance of four armies bent on destroying Parliament and Puritanism, whom you represent; simply holding on to London is not enough.

Each of the three English Civil Wars are replayed through the use of separate card decks that recreate the historical military and political events that could spell doom to the Parliamentarian forces. There are civil wars going on not just in England, but in Scotland and Ireland too; and each will have varying impact on the play of the game at different times.

The title comes from the purported response to the beheading of King Charles by his implacable foe, Oliver Cromwell, who remarked that this act of regicide was a “cruel necessity.”

Note: Cruel Necessity is our first Gold Banner wargame to exclude a mounted map inside. Because of all the gameplay real estate in Cruel Necessity, mounting the boards using our print-on-demand publishing model would have raised the Retail Price to $55.00 (i.e., a $15 increase), and that just seemed like too much. We hope our vaunted wargame customers can soldier on with our sturdy paper maps as the great wargames of yore have long provided.

What's in the box: