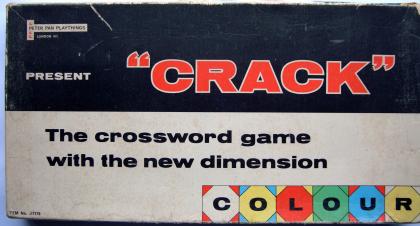 Crack is played on a 17x17 board, the squares being one of four colours or white. A "Start" square is near one corner and there are four "finish" squares in the opposite corner. There are 132 tiles each being in one of the four board colours and players each start with 12 of these and top up to 12 after their turn.

The first player must play a legal word through the Start square and thereafter players must play a word that intersects orthogonally with at least one existing word in crossword fashion. Intersection may be achieved by playing a word that adds a letter at the beginning or end of an existing word except the adding of a plural "S" is not allowed.

You score for every letter in the word(s) created. Basic scoring is by tile colour, blue=1, yellow=2, green=3 and red=4.
However, if you play a tile that matches the board square tile you have made an ACE. Each ACE initially scores a bonus or 10 in addition to normal score. After a player has made ten ACES, future scores are doubled, after 15 ACES trebled etc.

There is a bonus of 25 if you form a word with all the letters of the same colour (a Colourword).