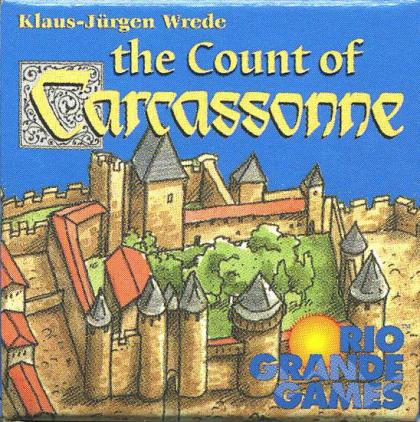 The Count of Carcassonne

Der Graf von Carcassonne (The Count of Carcassonne) is another expansion to the well-known series. It contains a further twelve tiles plus the count (a nice wooden figure). The tiles depict the town Carcassonne itself, which is visited by the Count. When a player places a tile that causes scoring for other players but not for themselves, they may put a follower in one of the four regions of the city. They may also move the Count to a region, imprisoning all followers in that region. Each region corresponds to a scoring method, and when a feature of that type is scored, the player may move their follower to that feature, to share in the scoring or even prevent another player from scoring! This expansion requires the basic Carcassonne game, and can be combined with any of the other expansions. (from www.spielbox.de)

The Count can be purchased in many places as an independent expansion.
The Count is also available in the HiG Compilation Count, King & Cult.

Voti e commenti per The Count of Carcassonne