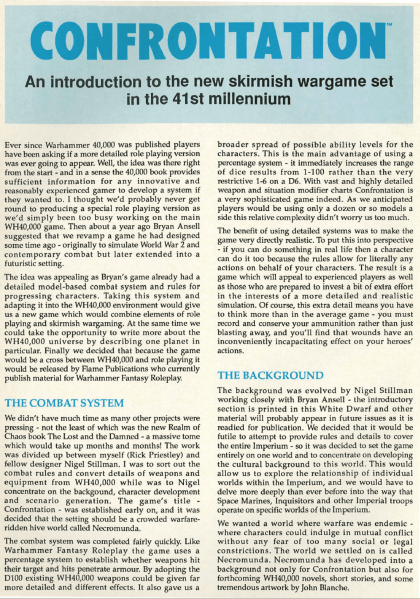 Confrontation was the name given to the original Warhammer 40,000: Rogue Trader skirmish game set on Necromunda in which gangs fought against each other, and attempted to increase their prestige and equipment. The game was published over a number of issues of White Dwarf, starting with Issue 130, and with the last installment in Issue 142. The mechanics focus on realism, allowing characters to make use of cover in specific ways, and requiring them to make specific tests when under fire. Actions are performed on a points basis, so a character could run forward and fire a few badly-aimed shots, or stand still and fire more rounds at a target. The game contains a large amount of detail concerning combat and psychological effects. Rules for purchasing and trading equipment for players' gangs, were also included. The game appears to be the precursor of Necromunda, published five years later.