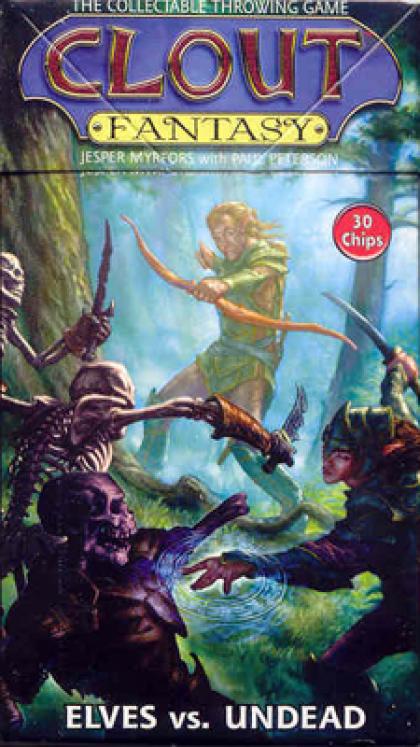 In the game, players have a stack of chips. Each chip has 0 to 6 clout points. Players have to make a stack 15 chips, while not spending more than a set amount of Clout on the stack. Players take turns throwing the chips into the play area, and depending on how they hit the table, the individual effects of each chip occur. Chips have stats, abilities, and powers that affect game play. Some of the powers and abilities include protection, poison, weaken, and the strengthening of other chips within a radius of where the chip lands. After the chips land on the table, players can decide to attack other player's chips. Further chip effects can come into play in these situations. For example, chips with the Taunt ability force attacking chips to attack them before any other chips. Chips are eliminated from the play area as play continues. After throwing and playing out all their chips, players count all their Clout still in the play area plus extra points for proximity to other chips. Whoever has the most Clout points wins.

Some chips are common, while others are unique, adding to the collectability factor. In addition, there are various "types" of chips including effects, characters, and bases, to name just a few. Where chips land on the table and how players throw will have a significant effect on how the game will play out. The chips are approximately the same weight and style as casino poker chips, not cardboard. Physical skill will be a factor in game play, so gamers can start practicing their chip tossing now with the poker chips they already own.

This is the first set in the Clout series of games.