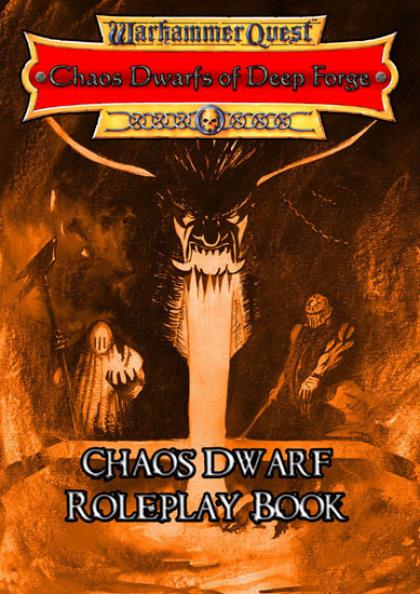 Excerpt from the introduction of the Chaos Dwarf Roleplay book:
"Players are most likely accustomed to playing Warhammer Quest as one of the Warriors in the core game, or possibly as one of the expansion characters, such as the Wardancer, Imperial Noble or Pit Fighter, for example. Similarly, players have also had access to official characters (meaning not characters created by fans) who are aligned with the forces of Chaos, in the case of the Chaos Warrior, or are at the very least unlikely to be seen as do-gooders, such as in the case of the Ogre.
If the players are so inclined they may forgo their usual characters with which they are accustomed, and take up a life of adventuring as a band of Chaos Dwarfs!"

The expansion rule book contains all the material necessary for players to adventure in the Warhammer world as Chaos Dwarfs (Dawi Zharr), working diligently to establish the city Zharr Grungron Ankor as the next great Dawi Zharr city.