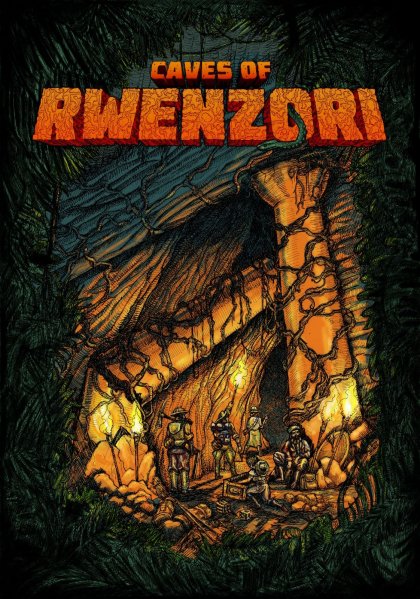 Caves of Rwenzori (Ru-Wen-Zor-Ree)&#10;&#10;Deep in the rainforest the cloud covered Rwenzori mountains hide a vast network of ancient caves steeped in myth and mystery.&#10;&#10;Explorers have descended into those dark halls looking for fame, riches and glory, when disaster strikes and the entrance collapses. As the dust settles the legend of the caves rings in your ears, &ldquo;Only one ever comes out!&rdquo;&#10;&#10;Players develop the Rwenzori cave network by placing hexagonal tiles. Each turn the cave network grows to the advantage of some and the demise of others. Players need to jump, swing and hack their way through ancient tribal traps, subterranean waterfalls, gaping chasms and more in an attempt to be the first to escape the cave and win the game.&#10;&#10;Caves of Rwenzori is a simple tile laying game, where every game is different.&#10;&#10;In Caves of Rwenzori players take it in turns to place cave tiles to slow and obstruct their opponents forcing them to stop or move back through the cave network.&#10;&#10;The goal of the game is to place all your tiles down and then be able to play the escape tile and win the game.&#10;&#10;It is a rip-roaring, laugh-out-loud adventure as you hinder the other adventurers and speed your way to escape and victory.&#10;&#10;