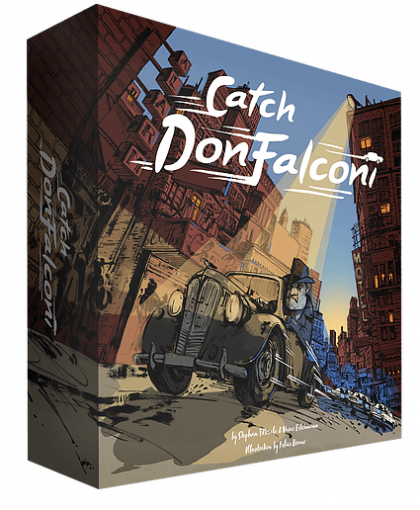 A fast-paced, chili-peppered chase in form of a boardgame. The notorious mafiosi Don Falconi escapes again from prison, where he is held for illegal distribution of his 'chili-boost' sauce in his pizza restaurants chain. The police from the 3 city-districts is alarmed and tries to catch him, before he can flee the city.&#10;&#10;The game has 5 different playing levels from 'easy' to 'diabolic'. So there's a fit for children from age of 6 to strategic thinking board game enthusiasts.&#10;&#10;By laying street cards, the street network of the city is build up and as the route of Don Falconi crosses with the routes of the police officers, the police might get blocked in the chase or manage to catch Don Falconi. If Don Falconi reaches an escape card, his escape was successful.&#10;&#10;&mdash;description from the designer&#10;&#10;