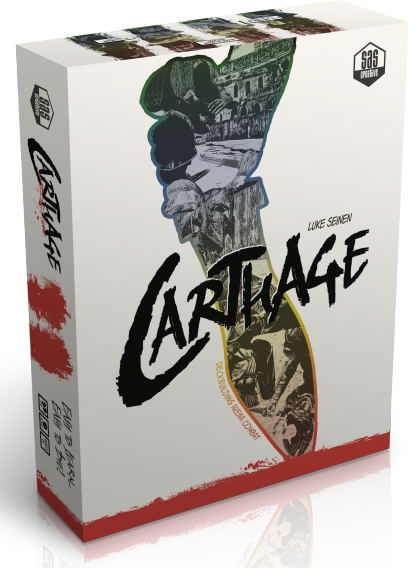 Carthage is a deck building board game where players move around a hex-based arena and face off in gladiatorial warfare to earn crowd favor, gain armor, and battle to the death. This game uses blended mechanics of deck building, hand management, and a whole lot of ruthless &quot;take-that&quot; combat. Enter the theater of Carthage where any move could be your last! Easy to learn...easy to die!&#10;&#10;A round begins with the Combat Phase where players play Action Cards, after which they spend crowd favor points to build better combat options, Lobby the crowd for advantages, or assemble their Starting Deck into a more lethal combination of tactics.&#10;&#10;&#226;&#128;&#139;Carthage utilizes deck-building and miniatures to give players a progressive game experience... ending in a vicious crescendo of blood and glory! Gladiators start in the theater as weak combatants, but as their actions gain crowd favor, they can develop their tactics (deck) into a lethal combination of damage, armor, and movement on the hex-based arena.&#10;&#10;Featuring a unique modular ruleset which allows players to alter the game complexity, play time, and strategic depth!&#10;&#10;