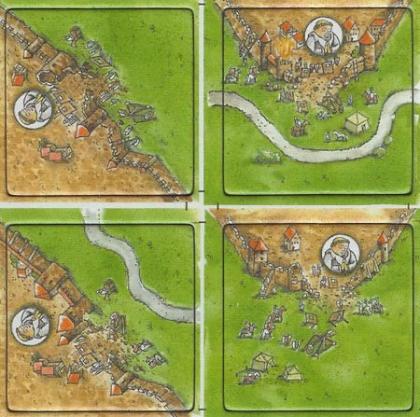 This is an 4 tile expansion for Carcassonne. The tiles allow you to lay siege on a city. A besieged city that is completed only yields 1 point per tile (2 if it includes a cathedral). Peasants supply the city as well as its besiegers, so every completed besieged city counts twice for them.

The Siege tiles with the original art ('Die Katharer') are exclusive to German magazine Spielbox. They were included in issue 5/2004 (October/November) and the August 2005 'Der Carcassonne Almanach'. (Artist is Doris Matthäus.)
The Siege has been re-released with new art by Rio Grande Games in October 2008 as part of the Mini Compilation Cult, Siege & Creativity. (Some have expressed concern with the new artwork as it is harder to see that a city is under siege.)
A 6 tiles version of The Siege called 'Die Belagerer' (again with new art but similar to the Rio Grande edition) is part of the Carcassonne Müller Exklusiv-Edition released in 2013 and sold by the German trade company Müller. It's also available now through Cundco.