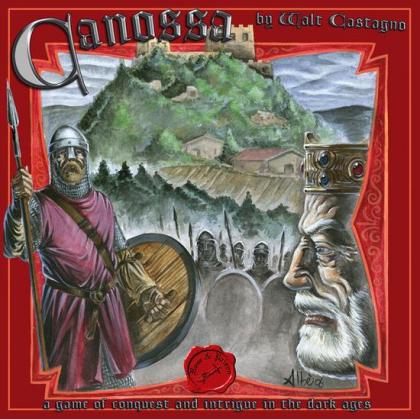 Anno Domini 947 a. C. marks the royal marriage between Lothar II, King of Italy, and Adelaide of Burgundy. Unfortunately, soon after this union is sadden due to the death of the King. The belief is that the King was killed by Berengario II, Marquis of Ivrea, hungry to reign the Kingdom. Adelaide, indignant, opposes this new regency, as Berengario II tries to force her to marry his own son, Adalbert of Ivrea. She runs away to seek refuge in the Canossa Castle, strategic in its position, owned and governed by Azzo Adalbert. Here comes the siege of the castle, and this is what we are going to recall: on one side Berengario II and his son, Adalbert, are besieging, and on the other Adelaide of Burgundy and Azzo Adalbert are under siege; in defense of them comes Otho I, Emperor of Germany, with his knights. Each courageous player will guide 2 of the Emperor’s knights, to try to free Adelaide, allowing Otho I to marry her in 952, and thus becoming the new King of Italy.