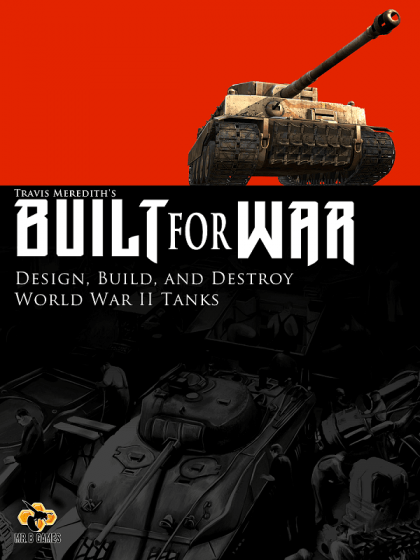 A World War 2 Tank Building Game!&#10;&#10;More than any other factor, World War II was decided by the decisive use of armor to outflank, outgun, and outrun the enemy. The innovations in design throughout the war were staggering. Guns grew larger; Armor became thicker; Engines and treads got bigger. Other additions changed the battlefield as well; radios, high explosives, machine guns, explosive armor, turret speeds, and even crew training all changed immensely during the war.&#10;&#10;What if YOU controlled your country&rsquo;s tank design process? What if YOU could determine the outcome of the war? Built for War puts you in charge of designing the main battle tank for one of the 4 major combatants in the war. Will you design a behemoth to top the vaunted King Tiger at the expense of agility and speed? Or, will you pursue faster, more nimble tanks to take down your enemies&rsquo; support troops knowing they are vulnerable to the big guns your enemies may be developing in secret?&#10;&#10;These are the hard choices that you will have to make. You decide. You design. But, whatever you choose, do it well. Your country is counting on you!&#10;&#10;&mdash;description from the designer&#10;&#10;