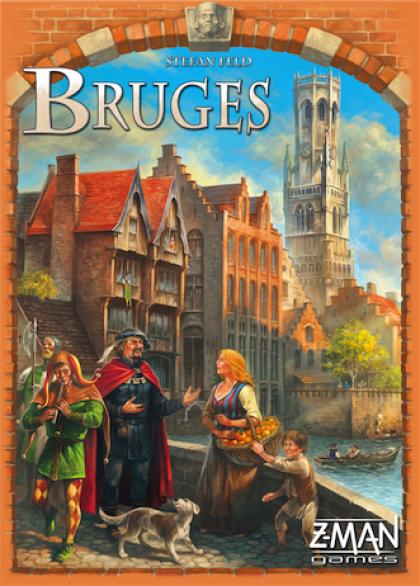 Bruges in the 15th century – culture and commerce flourish and make the Belgian Hanseatic city into one of the wealthiest cities in Europe.

In Bruges (a.k.a. Brugge or Brügge depending on the country in which you live), players assume the role of merchants who must maintain their relationships with those in power in the city while competing against one another for influence, power, and status. Dramatic events cast their shadows over the city, with players needing to worry about threats to their prosperity from more than just their opponents...

The game includes 165 character cards, with each card having one of five colors. On a turn, a player chooses one of his cards and performs an action, with six different actions being available: Take workers, take money, mitigate a threat, build a canal, build a house, or hire the character depicted on the card. In principle, every card can be used for every action – but the color of the card determines in which areas the actions can be used or the strength of the chosen action, e.g., blue cards provide blue workers and red cards help mitigate red threats. All of the action is geared toward the gathering of prestige, with the most prestigious merchant winning in the end.