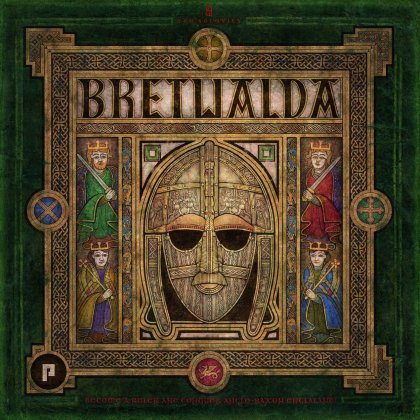 Britain. 796AD. King Offa of Mercia exhales his last breath. A new Bretwalda must be crowned.&#10;&#10;Northumbria, Mercia, Wessex and East Anglia. The four largest kingdoms of Britain. All vie for supremacy. Take control of one of these kingdoms. Subdue the Viking raiders. Use diplomacy, coercion and, if necessary brute, military strength to overcome your rivals.&#10; Claim the crown. Become the Bretwalda.&#10;&#10;Bretwalda is a game for 1-to-4 players that plays in around 2 hours. Each player takes charge of one of the kingdoms of England. Each kingdom has unique leaders and abilities. Victory is achieved through a combination of control of key areas, completing Chronicles, and constructing Abbeys to support the spread of Christianity across the land.&#10;&#10;Play is fast-paced. Over 12 seasons players compete by taking collection, development, mobilization and movement actions. With only 2 actions permitted per season, each decision is critical. Each season will see new events, and the armies of Vikings or independent Kingdoms may arrive or be bribed to attack rivals.&#10; Bartering and alliance-building are essential to success, but, with conquest critical to victory, betrayal is never far away.&#10;&#10;&mdash;description from the publisher&#10;&#10;