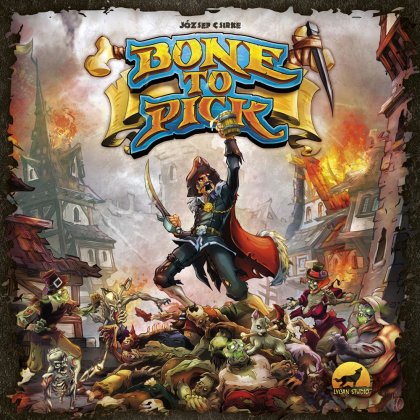 Bone to Pick is a thrilling, fast paced semi-cooperative party game with multiple game modes. Battle against the undead in a Quick or Campaign game!&#10;And if you want to &quot;raise the bar&quot; - try the Epic mode.&#10;&#10;1668. The world as we knew it is gone. Millions of roaming undead have taken over most of 17th century Europe. You and a ragged band of survivors discovered an abandoned haven, a ghostly city with crumbling stone walls. You are few, low on supplies and an undead horde is drawing closer. You have to make your stand here it seems. Kill the abominations, gather their trophies, but also beware of your treacherous companions, or you will not survive the onslaught.&#10;&#10;You&rsquo;ll need the Weapon Decks and the Undead Deck for the Base Game. Before starting the game, draw 10 Undead Cards randomly; without knowing their order or strength; to create the Undead Deck and each player receives their own Weapon Deck of 12 cards.Each player places their card face down and turn them simultaneously.&#10;&#10;The combined scores will tell whether you&rsquo;ve lost the battle&hellip;&#10;...or vanquished the enemy! The player who played the strongest Weapon Card can keep the defeated Undead Card as a trophy.&#10;&#10;If your Haven has survived the onslaught, the next step is to sum up the strength of the remaining Weapon Cards and to add the value of the defeated Undead Cards Trophy Points player by player. The player with the highest score will become&#10;the LEGEND.&#10;&#10;If you have lost and your Haven was razed to the ground, sum up the strength of the remaining Weapon Cards. The player with the highest score will become&#10;the SCAPEGOAT.&#10;&#10;Campaign Mode enables players to fight the Undead in four waves, where each wave tis stronger than the previous one.&#10;Players can upgrade their weapons after each wave and the best defenders will also gain extra rewards. At the end, if the Haven is still standing, the summed up scores of the four waves will determine the winner.&#10;&#10;The game can be played up to 12 players with 2 core box.&#10;&#10;-description from artist&#10;&#10;