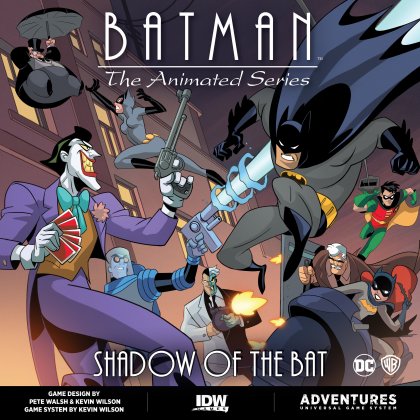 Batman: The Animated Series Adventures – Shadow of the Bat

Running off IDW Games' miniatures-driven &quot;Adventures Universal Game System&quot; (AUGS) engine, Batman: The Animated Series Adventures &ndash; Shadow of the Bat allows players to take the role of any hero in their roster in the game's 24 unique missions, which areall inspired by fan-favorite episodes. Even villains can be swapped out in every mission to change up the threats that players will face.&#10;&#10;In Shadow of the Bat, 1-4 players take to the streets as Batman, Batgirl, Robin, Commissioner Gordon, and Catwoman, each with their own unique character abilities, skills, and custom dice. They have to work together to take down the likes of Two-Face, The Penguin, Mr. Freeze, The Riddler, Scarecrow, Man-Bat, The Joker, and Harley Quinn. As with other AUGS games, villains can be controlled by the game itself for full co-op play or by a fifth player. AUGS' modularity means that players can even create their own dream scenarios and teams, including bringing in elements from other AUGS products.&#10;&#10;