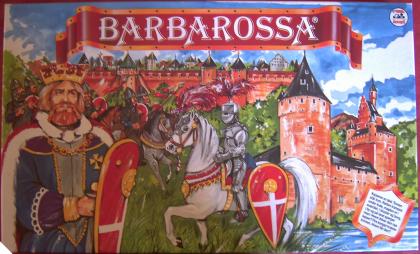 The Emperor is dead. The throne is empty. The courts are out of order and power is in the hands of whoever holds the sword. Everybody asks: Who will be the new Emperor? Four kings claim the throne. Who will have it?

The players take roles of medieval kings, trying to get rich by conquering cities and castles. Possession of cities and castles gives the right to claim taxes. Taxes are used to buy knights, squires and archers to protect the kings interests.

Before the game starts, the players agree on a playing time. Whoever is the richest (cash plus value of knights, squires and archers) by that time wins the game. In addition you can win by being the only player with a live king, or by having a certain numbers of cities and castles (2 players = 16, 3 players = 14, 4 players = 12).

Marketed as a family game, but rather complicated for that.