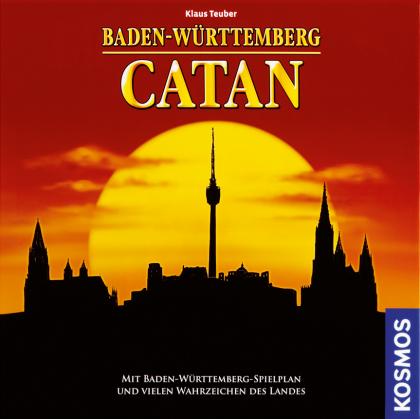 In 1952, three German states – Württemberg-Hohenzollern, Baden, and Württemberg-Baden – voted to merge into a single state, and for the sixtieth anniversary of that event, Kosmos and designer Klaus Teuber have released a special edition of Teuber's Settlers of Catan to celebrate.

Baden-Württemberg Catan is like other Catan games in that players roll dice to determine which areas on the game board produce resources that turn, trade resources with other players, and use resources to build settlements, cities, roads, and to purchase development cards. Settlements, cities, and roads earn their owners victory points (VPs), and the first player to have ten VPs wins.

Where Baden-Württemberg Catan differs from some Catan games – yet is similar to others, such as Catan Geographies: Germany – is that the game board features the southwestern state of Baden-Württemberg (with fixed resource numbers on the locations) and players can build key landmarks within the state, such as the Stuttgarter Fernsehturm or Heidelberg Castle.