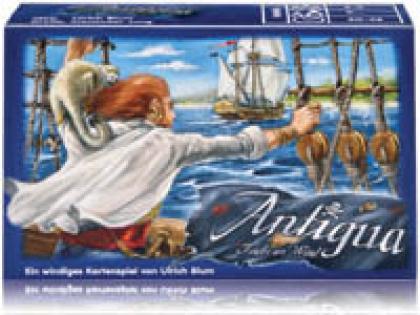 Antigua in the year 1717: It is rumoured that the wild pirate Black Sam has hidden all the gold he captured when boarding the Whydah on the "islands in the wind." Only two men survived when the ship afterwards ran aground on a reef near Cape Cod. Black Sam took the map with him to his watery grave – but perhaps the surviving navigator can help to find the treasure by locating the exact position of the islands. Is Antigua one of them?

GAMEPLAY:
Players start with a ship and its crew. Each player during his/er turn uses the actions provided by the crewmen of the ship. Each player may have a maximum of 4 crewmen. Each crewman has an action that may change during the game, thanks to the officer mechanism. A player, by using the officer, may
change the crewmen available actions and thus change the gameplay for all players.
The purpose of the game is to discover islands with treasure (with the help of the crew's Navigator), or while traveling, clash with other players and steal their treasure.

Kanonier: one kanonier crewman draws a card from the crew deck and adds its attack to the battle with a +1 bonus. Two kanoniers add +2 bonus
Offizier: changes the crewmen actions and then is discarded from the ship's crew.
Navigator: reveals a sea card your ship is on. If it is an island, gain a crew card from the deck for its treasure value and then discard the Navigator.
Steuermann: one Steuermann moves your ship twice. Two move your ship three times.
Maat: one Maat hires two new crewmen. Two hires three new crewmen. (if you have more than 4 crewmen, you must discard down to four).

GAME END:
The game ends when the biggest part of the sea has been discovered (how big is this part varies, according to the number of players), or when a pre-defined number of battles has happened and the winner is the player with the most treasures.