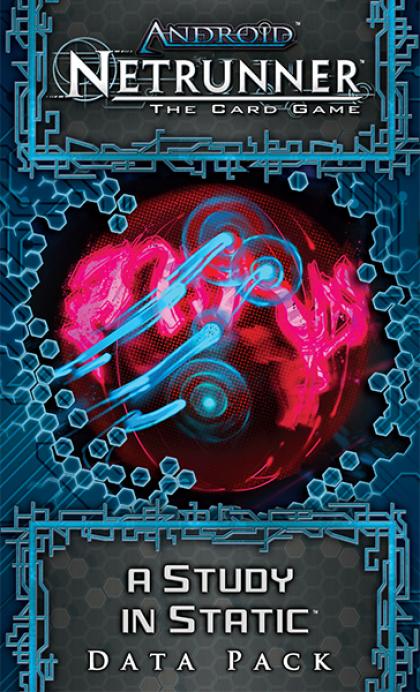 Android: Netrunner – A Study in Static

Time is relative. Time can be manipulated. The fourth Data Pack in the "Genesis Cycle" for Android: Netrunner, A Study in Static focuses on developing each faction's traditional strengths even as it opens up new strategies for players to explore; each of the four Corporations receives a new piece of ice, and all three Runners receive a new icebreaker. New resources and agendas permit players to pursue tightly focused deck builds centered around an increasing number of tricks and traps. Meanwhile, A Study in Static also allows players to reevaluate their existing decks and reconfigure them for greater efficiency.

With their advancements in ice, icebreakers, and hardware, the sixty new cards from A Study in Static (three copies each of twenty individual cards) escalate the game's cyberstruggles to a new form of art. No longer do the factions content themselves to building and breaking snares and subroutines; they turn their attentions to the flow of time itself. So much as time is a matter of perception and of movement, A Study in Static is a study in the ability to accelerate and impede the passage of time.