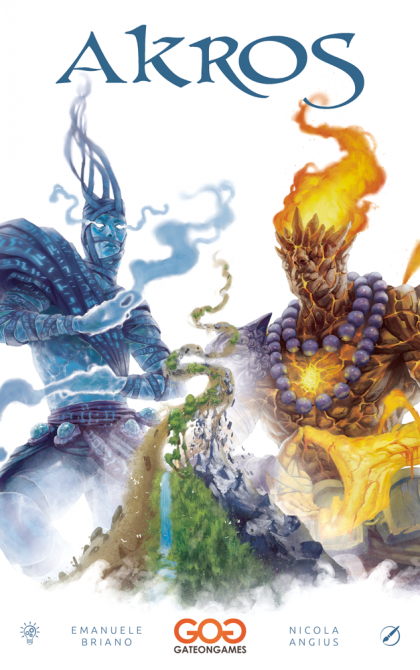 In the beginning there was Chaos, sluggish, shapeless and ever changing. Dissatisfied by the nothingness that surrounded it, Chaos decided to shape itself into the five elements, splitting its primordial essence into shards of self-conscious existence.&#10;Akros is an asymmetrical game of majorities and area control that will plunge you into a breathtaking challenge for two players.&#10;&#10;Akros is an asymmetrical hexagon-tile placement game for two players in which they both play as titanic creatures during the genesis of a new world. By using your elemental servants you&rsquo;ll have the chance to shape the scenery of a small new world to gain control of its various regions. At the end of the game, each player adds the value of all regions controlled by their servants to determine who has dominion over each environment. The player who has dominion over the majority of the three environment types will claim the merit of creation.&#10;&#10;&mdash;description from the publisher&#10;&#10;