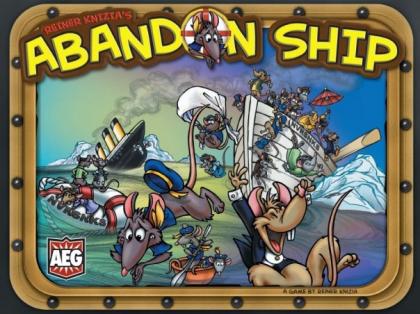 The S.S. Nvrsnks is going down, and who is always first off a sinking ship? The rats!

Abandon Ship is a game in which you play to move your group of rats off the ship before the rising water drowns them. The Nvrsnks is also loaded with valuable points-earning cheese, but don’t let desire for that lovely food send your rats to the watery depths. Your opponents may also share some of the rats in your group; they may want to move the rats in a different manner from you.

Game Play
Before play, each player gets secretly assigned three colors - these are their rats.
Players roll colored dice (there is one for each rat and one neutral die) and the active player chooses one of them to move the corresponding rat forward (or backwards in case the die shows an anchor). Encircled numbers and symbols can be used for a rat of any color. The next player rolls the remaining dice (in case there was an x next to the number, the previously used die remains in the pool) and does the same. When there is only one die left, the ship sinks a number of fields according to a token drawn. If the water level reaches a rat, the rat and the corresponding die is taken out of the game. When a rat reaches a cheese token, the player who moved the rat gets the token.
The first rat to reach the top deck gets nothing; the second rat scores 5 points, the third one 3 points and the fourth one 2 points. Most points wins.