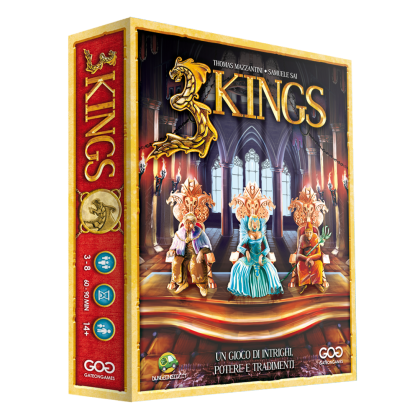 3 Kings is a game of deceptions, trickery and power that will bring the players to wear the shoes of leaders of powerful factions, with the objective to impose their own will on the triumvirate waiting the nomination of the new king.

Every player should play the game using intelligence and strength to impose his allies on the throne, without letting the other players understand the allies identities.
Killings, sabotages, bluffs and much more is waiting for you in a 3 kings match!

A match of 3 Kings is played in 4 turns. In each turn players should manage their hands to secretly plan their strategies.
The played cards will allow the players to interact with each other's strategies, to make hand-building and to vote in the intrigue phase to directly eliminate all the enemy kings' pretenders to the throne.