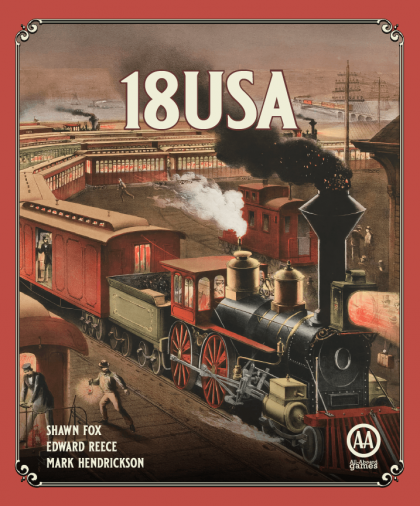 18USA is a member of the 18xx family of railroad games. The game uses most of the rules from 1817 and requires a copy of 1817 to play. The primary differences from 1817 are that 18USA adds randomization during initial setup, modifies the train manifest and train exporting rules, and provides a completely new set of private companies. The financial complexity of mergers, loans, and shorting from 1817 is thus combined with randomization of the map and private companies during setup to present players with a different scenario every game.&#10;&#10;Game Features:&#10;&#10; Uses a map of the contiguous United States&#10; Follows 1817 rules for loans, mergers, and shorting&#10; The value of each off-map area is randomized during setup&#10; A subset of 15 out of the 30 private companies is used each game&#10; City subsidies provide incentives to start companies in otherwise inferior locations&#10; Only 3 of the 6 most valuable cities are in play each game&#10;&#10;&#10;&#10;&#10;