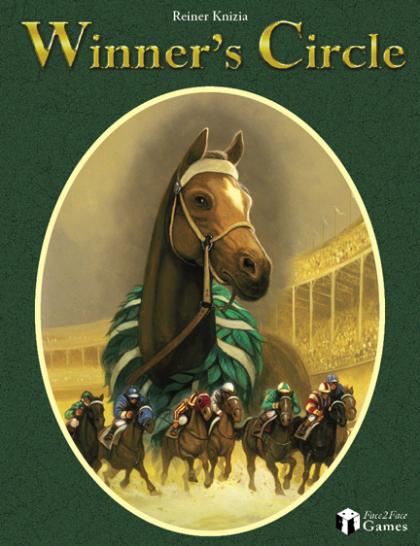 A lively game of horse racing where players bet on several of seven horses to try to gain the most money by the end of the game.

A re-issue by Alea of Knizia's Turf Horse Racing published by Gibsons Games. This edition has better graphics and uses the same mechanism of 4 symbols on the horse cards also appearing on the die. Players roll the die and choose which horse you want to move from those not taken their turn yet. The seven horses vary in strength, but even the weakest horses have some amazing bursts of speed. Players bet on the horses before each race and so either co-operate or compete to get their horses over the line. There are money tokens now for the winners, but not enough supplied in the game to pay out properly.

There are various differences between this edition and THR. There are only 3 races instead of 4. The circuit is oval, the horses start in a line of seven places, not all together. In the race, they cannot share spaces so a horse can only move to the next available empty space. This can make it easy to block the ones at the back and it's nearly possible to lap the final horse, or end the race before it's even crossed the start line. I've never seen a horse race where they start nose to tail!

There is a variant where the betting is done secretly with players using a 0 betting chip (for bluffing) in addition to the 2,1 and 1 betting chips of the basic game. There's also a sprint bonus in the race and a penalty for the last horse.

"Royal Turf" is #2 in the Alea small box series.