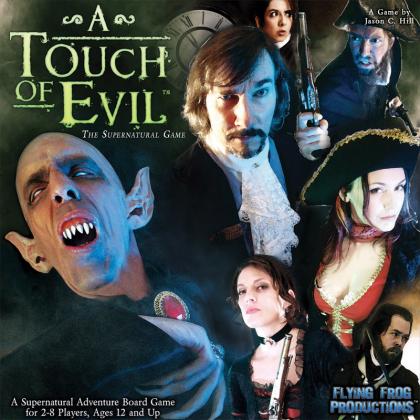 A Touch of Evil: The Supernatural Game

'Tis the dawn of the 19th century; an age of science, superstition, and witchcraft.
Howling fills the night as a full moon rises over the small, secluded village of Shadowbrook.
Gruesome murders have become a daily occurrence and terror haunts the streets at night. An evil creature has taken up residence here and the countryside is engulfed by a tide of darkness.
But all is not lost…not yet.
A small group of heroic individuals, with the courage and strength to fight, have arrived in town. Some just passing through while others have come with a purpose; but all will be put to the test as they race to save this cursed town from falling into darkness.
It will take a cunning mind and strength of spirit to determine who is friend and who is foe… to solve the mysteries and hunt the beast to its lair.
But the secrets of Shadowbrook run deep. Gossip and rumors run rampant and these few Heroes may soon discover that they are outsiders here and this town is already so rotten from within there is little left to save.

"A Touch of Evil, The Supernatural Game" is a fast-paced game of fiendish creatures, dashing Heroes, and high-adventure.
Each player takes on the role of a unique monster-hunting Hero, racing against time to stop the forces of darkness from claiming another foothold in the world of man. Only by investigating the town and building your Hero’s strength can you hope to hunt down the Supernatural Villain to his Lair and defeat him in an epic Showdown. Players can race Competitively to be the first to defeat the Villain and save the town, or they can work together Cooperatively to defeat a much stronger Villain.

Featuring a gameboard map of Shadowbrook and its surrounding countryside, eight Heroes to choose from, and four different Supernatural Villains to hunt; each with its own host of unique Minions and powers to drastically change the game.
A Touch of Evil is designed to create an adventurous cinematic feel as the story and game unfolds.

So grab up your Wooden Stake, stuff some shot in that Musket, and hold onto your Tri-corn Hat; no one is safe from the creatures of the night and no one can be trusted…for inside everyone lies A Touch of Evil.

Recensioni su A Touch of Evil: The Supernatural Game Indice ↑

Eventi riguardanti A Touch of Evil: The Supernatural Game Indice ↑

Video riguardanti A Touch of Evil: The Supernatural Game Indice ↑

Voti e commenti per A Touch of Evil: The Supernatural Game