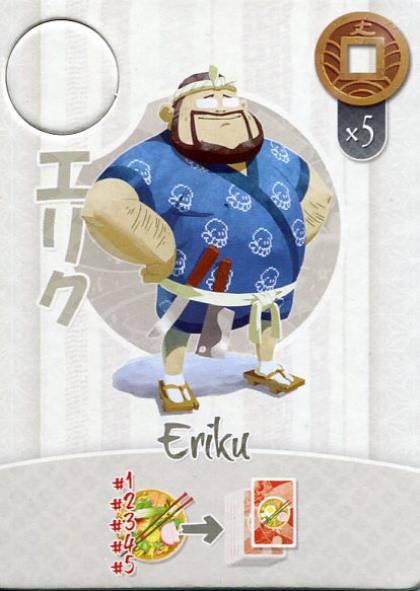 Eriku is a bonus character for Tokaido / Tokaido Crossroads

The card was given out at Essen Spiel fair 2013, with the release for Crossroads.

Small backstory on the card: Eriku is a friendly wink to Eric Burgess (host of the podcast Boardgame Babylon). When I came to the Strategicon convention in Los Angeles, in 2012, I taught Eric Tokaido. The game pleased him, so he decided to explain the rules to other players during the event. I caught him at one of his explanations, committing a small rule mistake: he indicated that travelers took a meal at the beginning of the game, the relay station of departure. I then politely interrupted him, saying, "No, Eric, travelers do not eat before starting their journey, this first meal must be earned!" To which he replied, "Of course we eat before starting the trip, we are Americans ain’t we!" The character Eriku was born shortly after.